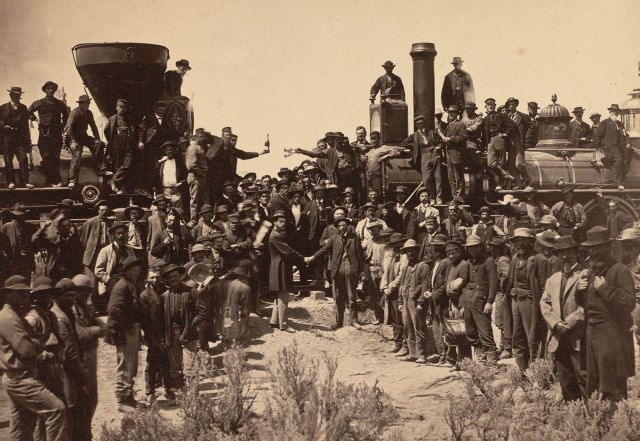 A.J. Russell photo of the celebration following the driving of the "Last Spike"

Seeking opportunity, adventurous Americans began migrating to the west coast of North America in the first half of the 19th century.  With the first wagon trains of settlers leaving Independence, Missouri in 1836 they would embark on an arduous five month journey. With the discovery of gold near Sacramento, California in 1848, political pressure mounted for a safe and speedy passage to the Pacific Coast.  Exploratory surveys were needed to determine a feasible route through mountainous terrain many said was impossible to cross.  Even as the United States was embroiled in a Civil War (1861-1865), Abraham Lincoln had the courage to start building a transcontinental railroad that would help unite all of America in 1862. 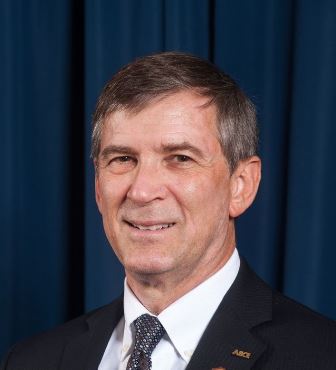 Paul Giroux received his BS in Construction Engineering from Iowa State University in 1979.  For the past four decades, he has been with Kiewit Corporation, working on a wide variety of heavy civil engineering mega projects throughout the United States. Paul played a key role in notable projects such as the Fort McHenry Tunnel in Baltimore, several projects on the Big Dig in Boston including the new Zakim/Bunker Hill Bridge, the new San Francisco Oakland Bay Bridge East Span, and many other projects.

In 2008, he was the ASCE Chairman and featured speaker for Brooklyn Bridge 125th Celebration in New York and, in 2010, he presented the closing speech at the ASCE Hoover Dam 75th Anniversary Symposium in Las Vegas.  In 2012, Paul served as the ASCE Chairman and principal lecturer for the Golden Gate Bridge 75th Anniversary.  In 2014, Paul was a featured speaker at Global Engineering Conference in Panama to commemorate the 100th anniversary of the opening of the Panama Canal. In 2017 Paul assisted with the 75th anniversary of Grand Coulee Dam. In 2019, Paul was a featured speaker at the Transcontinental Railroad 150th Anniversary Symposium in Sacramento, CA.

Paul is the author of several bridge design and civil engineering history papers.  He is an active public speaker, having presented over 300 lectures and seminars at over 80 engineering schools throughout the United States and other international venues.  Paul was the recipient of the American Society of Civil Engineers’ Civil Engineering History and Heritage Award for 2013 and the G. Brooks Earnest Award in 2015. In 2016 he received the Norm Augustine Award from the American Association of Engineering Societies and was elected a Distinguished Member of ASCE.  In 2017 Paul was the recipient of the ASCE Roebling Award for Construction Engineering, and was inducted into the Iowa State University Construction Engineering Hall of Fame in 2018.