Officers of the West Tennessee Branch

Katie Bowman graduated from California State University Fresno in 2015 with a Bachelor of Science in Civil Engineering at the age of twenty-one. After graduating, she relocated to Santa Barbara, CA, to begin her career at Stantec, a civil engineering firm. At Stantec, responsibilities included land development and structural design under the supervision of a Principal Engineer.  In September 2018, Katie became an employee at Kimley Horn and Associates in Memphis, TN. This young woman led land development projects at Kimley Horn, as well as being one of the main design engineers on her team. She has technical experience in Arkansas, California, Tennessee, and Mississippi regions. Katie is a licensed professional engineer in the states of Arkansas and Tennessee. Katie started graduate school at the University of Memphis in the spring of 2019, studying Civil Engineering. In the spring of 2020, Katie became an employee at the University of Memphis as a Graduate Research Assistant. Katie graduated with her master’s degree in Civil Engineering at the University of Memphis in the May of 2021. In the spring of 2021, she began her PhD program at the University of Memphis studying Civil Engineering and continues to be a Graduate Research Assistant for the university. At the University of Memphis, experience includes serving as lead graduate assistant for the West TN STEM Hub (including managing undergraduate students, liaising with education and community partners, and overseeing the ambassador training program), developing independent transportation research, assisting on a variety of federally funded projects, and supporting activities of the Southeast Transportation Workforce Center. 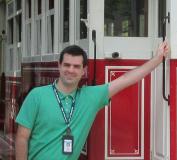 Evan is a lifelong Memphian who graduated from Christian Brothers University in 2014 with a BS in Civil Engineering. He is currently a Senior Drainage Design Engineer with the City of Memphis and has worked with the City for over 8 years. His roles include the management of stormwater capital improvement projects as well as managing the City's Drainage Masterplan Study program. Prior to his current position, he had a brief stint with the City of Lakeland as the city's stormwater coordinator as well as an internship with CEC. He passed his professional engineering exam in 2019 and is a registered engineer in the State of Tennessee. Evan has been involved with ASCE since college where he served as the CBU student chapter webmaster all 4 years and chapter secretary for 2 years. He has been on the ASCE West Tennessee Branch board since 2013 when he was elected as a board member until he was elected in 2019 as the secretary, 2020 as vice president, and 2021 as president. He is currently serving as the Tennessee Section president. He has also been involved with the Branch's younger member group, "volunteering" as the group's president in 2017 but still assists the group when needed (he's currently the treasurer for the group). In his spare time, Evan enjoys being outside: mainly hiking whether it's in the mountains of East Tennessee or closer to home in other areas of the Mid South, as well as biking or walking near his home in Downtown Memphis. He is also currently spending much of his remaining time obtaining a Masters in Engineering Management at the University of Memphis with an expected graduation date of 2024.

Bryan is originally from Marion Arkansas. He attended the University of Memphis and graduated with a Bachelor of Science in Civil Engineering in 2015. During his time at the University, he interned as an engineering field inspector for PSI. After graduation, Bryan began his career in Geotechnical engineering and Material testing with PSI as a project manager. Bryan is currently the department manager for construction services group with PSI. He oversees the material testing and QA/QC program for several construction projects here in the Memphis area.

Emily is the current secretary for the ASCE West TN Branch