Robert Hume, on 21 July, 1997, officially notified John Clark, then President-Elect of the Colorado Section, of the committee's intent to investigate formation of a NC Branch. A "Proposal for Northern Branch of CO Section" appeared on the 7 Aug, 1997 agenda of the CO Section's annual planning meeting.

On 25 Sept, the committee decided to included the Zip Codes of 805XX, 806XX and 807XX in the Branch, which included parts of Adams, Boulder, Larimer, Logan, Morgan, Phillips, Sedgwick, Washington, Weld and Yuma Counties. This would encompass some 333 of the total 3093 members in the CO Section (excluding Life, +65, and Student Members). 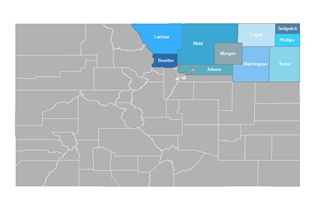 The committee submitted a request for $1500 in funding from the CO Section (equal to the Colo. Springs Branch's allocation). The inaugural meeting of the Branch was scheduled for January, 1998, with the objective of a presenting a program of wide interest to ASCE members in the area. The American Public Work Association and Profession Engineers of Colorado were to be contacted to solicit support and possible future joint participation.
October 23, 1997, the first official Branch meeting was set for Jan 22, 1998 at 6:00 pm and the rest is history...

READ THE REST OF THE STORY